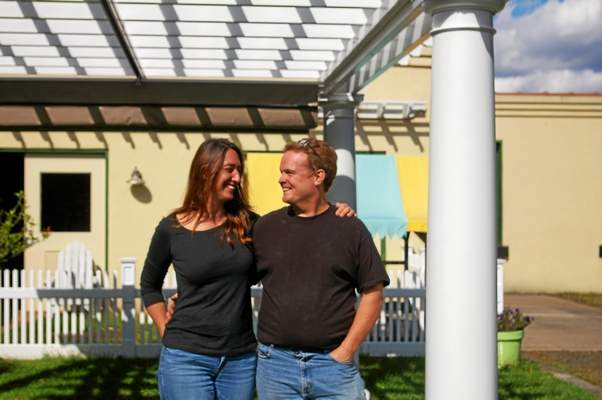 Husband and wife Max and Cheri Baldwin bought Baldwin Furniture’s Middlefield Street location in 2006 and have been expanding the business with the changing economy ever since. Here they stand beneath one of the firm’s popular pergolas. Aysha Mahmood — Special to the Press
By Aysha Mahmood, Special to the Press
POSTED: 10/24/14, 4:28 PM EDT | UPDATED: ON 10/24/2014 0 COMMENTS

Baldwin Furniture of Middletown is best known for its version of rustic wooden plank Adirondack chair designed by Thomas Lee in 1905. It takes its name from the designer’s vacation in the Adirondack Mountains in 1903. Courtesy photo MIDDLETOWN >> When you walk into Baldwin Furniture, you’re met with such a warmth that it’s easy to see how family-oriented the business is.

Although the showroom is the main attraction, the business also holds a playroom, two dogs, and swings in the backyard that sit right next to a scenic river. Max and Cheri Baldwin bought the Middlefield Street location in 2006 and have been expanding the business with the changing economy ever since.

“As the market line changes, the product has to change.” Baldwin says, “You have to adapt quickly.”

The company is best known for its Baldwin chair, a version of rustic wooden plank Adirondack chair designed by Thomas Lee in 1905. It takes its name from the designer’s vacation in the Adirondack Mountains in 1903.

When the economic recession began in 2008, the business was hit hard.

“We’ve never been in a situation where we haven’t had business before,” he said.

They looked at the time off as having more time to spend time with their newborn son Max and make necessary adjustments to their business. Shortly after, sales picked up again. The couple says they owe their success to their customers. “They’re just so great,” Baldwin says. “I would say about 70 percent of our sales are from repeat customers. They show a great amount of loyalty.”

What Baldwin believes keep his customers coming is the fact that he’s always connected with them.

“They’re never isolated,” he says, “I know what they like and don’t like because when we go to their house, we get immediate feedback from the customer.”

Baldwin uses this information to personalize every order. If building a wooden chair for example, he has to be aware of the textiles and colors that go into every board and place them together in a way that his customers love.

“There’s a lot of artistic expression that goes into it,” he says.

With his drive to grow with the changing economy and apply that artistic expression, Baldwin began to build pergolas.

He built the first pergola for his house; and because he enjoyed building it so much, he continued to build more. Baldwin then spent a majority of his time and energy just focused on the pergola line alone and eventually created five different styles of the structure.

“Most people would think I’m crazy for setting up this product line up with really no demand,” he explained. “But I knew from the beginning that my customers would love it.”

As predicted, the pergolas became a hit and they now sell for about $6,000 to $9,000 depending on what the customer wants.

Production of the pergola happens over the span of three weeks. Customers have the option of going to Baldwin’s website, customizing their pergola and getting an estimate price right then and there.

The Baldwin business website has been a fundamental part of their success and is one of the things that Baldwin says set them apart from their competitors. With a website, customers have the ability to adjust what they want online. He owes his online business to the computer skills he learned as a kid.

When he was 12 years old, he taught himself how to program. For four years, he would spend eight hours on the computer creating computer games. He then became very interested in woodworking and construction, prompting him to start his official business when he was just 16. When the internet came around in the early ‘90s, Baldwin had the chance to combine his two loves and used them to start his business.

“I wrote my first website for the store in ‘96 and it was number one on Yahoo ... It was ultimately that background in computers that allowed me to write the website and cause our business to take off,” Baldwin says. “It definitely gave us some edge in the market.” 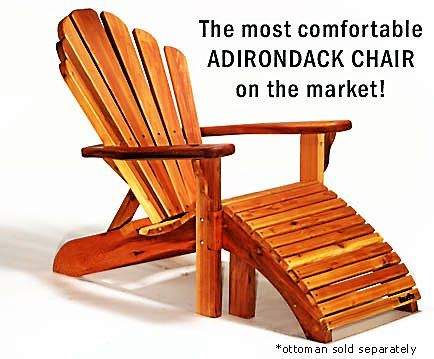 However, Baldwin states it wasn’t such an easy road getting to where he is today. There were some moments when he, along with others, doubted what he was doing. By the time he was 20, Baldwin had accidents in which two of his fingertips were cut off and there were moments when he questioned if he even wanted to be in the woodworking business anymore.

“But after I married my wife Chari, it got better,” he says with a smile.

Chari, along with Max’s brother and mother, work alongside him, and Max says he’s very appreciative that they all work together.

“It’s so nice to be near my family,” Max states.” People don’t spend enough time with their family and I get to every day.”

Although self-employment is difficult in this changing economy, the Baldwins have found a way to make it work by adjusting to the economy. They’ve sold furniture, pergolas, vinyl pergolas and now do commercial jobs.

As for the future, Baldwin says they plan to do more of the high-end commercial jobs. They just completed a job for Avalon Bay, a company that builds massive outdoor complexes and called Baldwin’s pergolas the best they’ve ever seen. He now makes all their pergolas and look forward to the challenging projects that lie ahead.

He hopes his business has encouraged young entrepreneurs to start their own business doing what they love. “Anytime you see there’s something missing, take the opportunity to offer a product people want ... In this economy, you have to adjust.”

For information on Baldwin Furniture, see baldwinfurniture.com or call 860-344-5103. 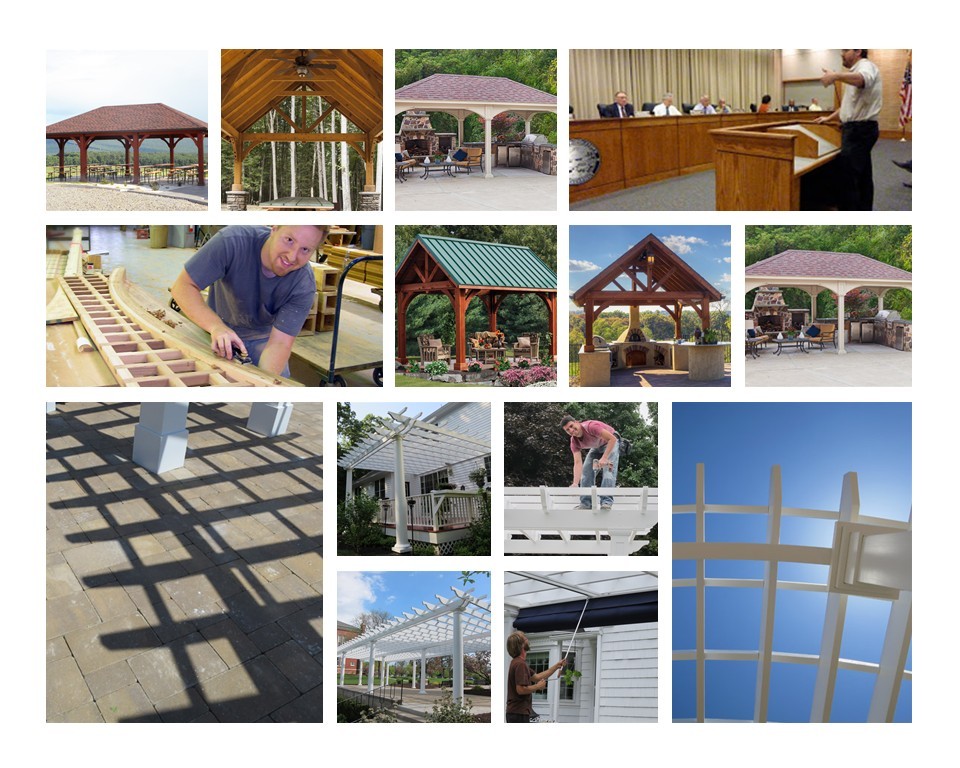 Baldwin Out Door Comfort prides itself on providing the highest quality outdoor products.

Before I made my purchase decision, I did get a quote from a local, highly-regarded pergola constructor. Baldwin's price was lower, and from what I've seen, I think the quality is higher. In summary, I'm pleased with how the pergola came out, and satisfied that I choose Baldwin as my supplier.

I recently purchased a pergola kit from Baldwin Pergolas. It was a large custom pergola measuring about 16 by 36 feet. I am totally happy with the materials, workmanship, and customer support provided by Baldwin Pergolas. My wife and I were able to assemble the pergola over the course of a few days. (With a little help from two neighbors on the first day.) We found that everything fit together exactly as planned. Everyone who has seen the pergola, including our neighbors, and the building inspector (!), has been very impressed with the design of the pergola, the quality of the materials, and the precision of its construction. Their comments have included "beautiful", "amazing" and quite a few "wows" ! Our experience with Baldwin Pergolas has been completely positive. Their personal commitment to quality shows in everything they do. Thank you, James Haufler Sparks, Nevada

To Max and all the folks at Baldwin Pergolas who contributed to the creation and installation of our beautiful pergola - Thank you, thank you, thank you! Not only did you get the job done right on schedule and in time for our wedding, but the craftsmanship is impeccable. You are all very talented and deserving of great success.

Max, We are so taken with our pergola. It is the perfect transition from the screened porch to the deck. We are so pleased with the entire transaction. If only we'd had the time spent with the deck people that we spent with you. The results are breathtaking. Take that from someone who works in millimeters.

One of these days, I may be back in touch about a second pergola for the patio in front of my house. I am quite happy with the one you built here, which we use a lot in the summer.

Thanks so much, Matt. The craftsmanship of your Pergola is outstanding. My wife and I love it. Thanks again!

We actually put most of it up last weekend. The pergola made such a dramatic difference in the backyard. I'm very happy with the investment.

I thought you would appreciate seeing our Adirondack Chairs next to our new Rockers. The Adirondack Chairs have been poolside for 12+ years through rain, snow and all elements. I'm happy to report that they are as comfortable and sturdy today as they were when we first purchased them. The rockers are a great addition and I'm sure will standup just as well as the years pass. Thanks for making a solid and well constructed product. Regards

We are extremely pleased. If there is any picture that I haven't taken and you need one a special way, Don't hesitate to call or write. Max made everything easy for us, make sure he sees these pictures.

The pergola looks beautiful and is getting rave reviews. It took about 7 hours to erect with 2 fairly good hands to help me. Thanks Max, I think I will have more work for you in the future.

It's been a tremendous honor to design and build these fantastic structures for our customers. We look forward to upcoming challenges and the beauty they bless us with. 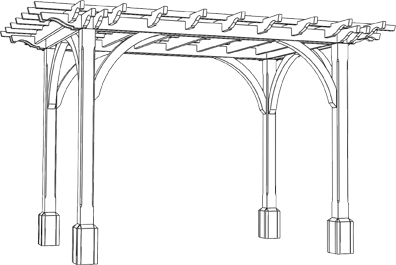 
OUR MISSION: To make the world more beautiful!